Most of the text of this page is taken from The Bells of Southwark by Nigel Pointer. 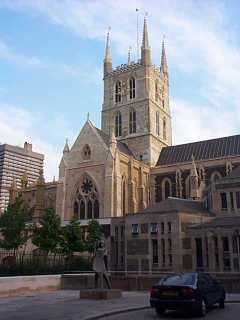 The history of St Saviour’s goes back for over a thousand years. There was a church on the site of the present cathedral long before the Conquest, inhabited by a house of sisters, founded by a maiden named Mary. Reliable, documented history, however, does not begin until 1106, when Bishop Gifford built a priory church for Augustinian canons. This first building was sadly destroyed by fire in 1212, and was replaced by another built during the period 1207-13. The retrochoir (behind the magnificent altar screen) still remains from this church, saved from decay by architect George Gwilt in 1833. Building of the tower commenced in 1310, but was not completed until 1400, when the transepts were added. These were also remodelled later.

The priory was dissolved in 1649, and the church would have remained unused but for the efforts of Stephen Gardner, Bishop of Winchester (in whose diocese Southwark then was). He arranged for the parishioners of the two parish churches, St Mary Magdalene and St Margaret’s, to lease the church from the Crown for the sum of £50 per annum. It became the church for the united parishes, and was given the name of St Saviour’s. The lease, which was first granted in 1540, was renewed until 1614, when the parishioners purchased the church and rectory outright for £800.

During the 19th century, Southwark became overcrowded, and poverty was rife. The nave of the church collapsed and was replaced by a new structure which had only one advantage : it was cheap. When it became clear that this was not sufficient to serve the growing community, the only possible course of action was to rebuild the nave again. Somehow the money was raised, and Sir Arthur Blomfield was appointed architect, chiefly because of his signature style of Early English grace. The nave was completed by 1900, and benefactors were found to give all the fittings. St Saviour’s church was consecrated as Southwark Cathedral in 1905. 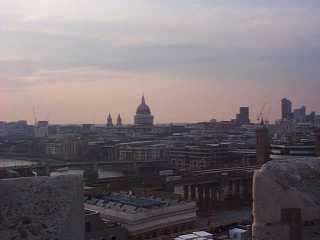 The tower, as we have previously seen, was begun in 1310, when the four massive Norman piers were erected. The top two tiers of the tower were built by Bishop Fox of Winchester between 1520 and 1528. Each stage has two large windows on each side. The upper stage is surmounted by an embattled parapet, formed of alternate panels of dark flint and white stone. Octagonal, crocketted pinnacles, topped with vanes, rise from each of the four angles. The vanes were added by George Gwilt when the tower was restored in 1818, replacing the originals of 1689.

The tower itself is 35 feet square, and rises to a height of 163 feet six inches, including the 34 foot pinnacles. Let us begin at the bottom. The entrance is in the north-east pier; a stone spiral staircase of 97 steps leads to a gallery of small columns, commanding splendid views of the chancel and High Altar. The ceiling of the chancel crossing was beautifully restored in 1976 to include some of the bosses from the old nave ceiling of 1469. From the gallery, we move into the roof space above the nave, then up the straight wooden staircase into a small room above the chancel crossing. This room was the highest point of the original tower, completed around 1400. In those days it would have been the belfry, and also supported the faces of the first clock, the movements for which were in the gallery below. The room now accommodates only the pendulum of the clock and the winding mechanism for the great candelabra of 1680. As we climb the wooden spiral staircase, we reach the door to the spacious, panelled ringing room, and from there to the belfry. Climbing still further brings us to the viewing platform into the bell chamber, immediately above the tenor bell. Another few steps and we emerge onto the leaded roof, 166 feet from the ground, having climbed 208 steps. A clear day provides spectacular views of London, with many City landmarks clearly visible.

Little is known of the history of the first peal of bells to be hung in the tower. According to the earliest available records, the original peal numbered seven, and until 1424 the weights and names were as follows:

At this time, the marriage of Bishop Henry Beaufort’s niece, Joan, and James 1st of Scotland took place. To mark the occasion, the prior, Henry Werkeworth, had the bells recast and augmented. The new bells were heavier than before, and some (though not all) of their names were changed:

It is not known whether these bells formed a ringing peal of eight, though it is considered unlikely. If they did, however, they would have been the first octave ever hung in a London church, and probably the first in all England.

An inventory of the goods and ornaments of the church in 1548 records the fact that there were then "vj belles hanging in the steeple with a litell bell", while a later inventory gives "vj belles of accorde and one small bell, which belles the parysshe bought of the late kinge of ffamouse memory Kinge Henry the eight at the purchesinge of the hole Churche".

From this, it would appear that only six of Prior Werkeworth’s bells formed a ring; the other two were saunce bells of which the parish bought only one - in 1540 when the church was leased from the King for the use of the parish. The bells and many other church possessions were bought at this time.

Whether or not Prior Werkeworth’s bells formed a true ring of eight, the octave was certainly completed by the seventeenth century. Historian John Aubrey, in his History of Surrey (1673) records that there were "In the tower eight tuneable bells, on them several modern inscriptions of the times of their being cast; but on the fifth is this old one put on a bell placed here by Prior Wentworth" (sic.):
Consonat ecce pia campana vocata Maria
Quam Prior Henriccus Wentworth sibi fecit amicam

Aubrey also noted that the fourth bell bore the date MCCCCXCIV (1494), so at least two fifteenth century bells survived until 1734. We know that these bells rang out in 1577, when Queen Elizabeth I attended a wedding at nearby Winchester Palace. The tenor of this ring weighed 46 cwt, 3 qrs., 21 lbs.

Three historic ringing feats are also believed to have been performed on these bells. The first, which is the earliest account of change ringing in the tower, was on 18th November 1684. The Society of College Youths are said to have rung three extents on the largest six bells; one each of Oxford Treble Bob, College Single and Oxford Bob. At the time, this was the longest piece of ringing that had been performed anywhere without stopping. Although there is no contemporary record of this piece of ringing, it had certainly been recorded by 1738, and is almost certainly genuine. (The occasion was commemorated with a repeat performance, also on the back six, exactly 300 years later, using the same methods).

The second, which we can verify, was the first peal on the old octave, 5040 Bob Triples, rung on 19th December 1730. The band were again members of the Society of College Youths, and the peal was composed and conducted by Benjamin Annable. It is also believed that a second peal was rung on these bells, on 25th March 1732, again of Bob Triples, by the City Youths. Unfortunately, no information is available about this performance.

Late in the seventeenth century, the authorities of St Saviour’s church were clearly beginning to consider the possibility of augmenting the bells. The guide to the history of church bells in Worcestershire states that Mr. Prattington of Great Malvern ’has a note dated 1746, stating that “The Tower [Great Malvern] has Bells remaining in it; 3 others, as I was informed by the Clark, were sold some 50 or 60 years ago to St Mary Overy’s church in London”.’ No other record of this transaction can be found, so it can only be assumed that, if indeed it took place, the metal from the Malvern bells was melted down as scrap to provide for the new twelve at Southwark. 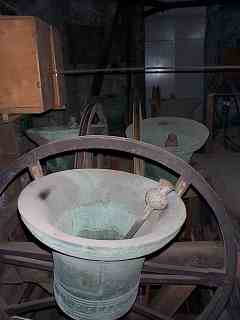 Little happened then to the bells until 1734, when Thomas Gardner was churchwarden of St Saviour’s. It is not known (though legend claims so) whether he was the same Thomas Gardiner who was elected a member of the College Youths in 1713. Either way, Gardner and his family were very interested in the bells, and a scheme was set in motion to recast the old eight into a heavy ring of twelve. The work was given to Samuel Knight of Holborn. Knight was the last of a long line of bellfounders who started work at Reading in 1518, the first being William Knight. His bells, though excellent in tone, appear to be very rough castings. It seems, however, that he was not as successful at casting larger bells. Although he cast several heavy rings, the tenor in each peal has subsequently needed replacement. Southwark’s was the last of Knight’s tenors to survive. When asked to carry out the work, Knight set up his foundry for the job in Winchester Yard, immediately next to the church. The parish itself had to pay for the new metal, presumably because Knight did not have the necessary capital to buy so much bell metal.

The massive frame for Southwark’s new bells (still in situ after some 260 years of use) was made by Robert Catlin (1709-51), a lifelong friend of Samuel Knight’s. Indeed Knight made Catlin his executor, and left the business to him when he died in 1739, just four years after the completion of the new twelve at Southwark.

Details of the new twelve were as follows:

The balance sheet presented by Knight at the completion of his work was as follows:

Subsequent Work on the Bells

In 1910, when the tenor was recast, a major overhaul was carried out. All eleven bells, plus the new tenor, were re-hung with all new fittings. The six largest bells were fitted with cast iron headstocks, and the remainder with elm. The frame was also strengthened with tie bolts and angle plates. A previous attempt at strengthening had been the insertion of chain ties of cast iron, “applied for the security of this tower, September 1819.” This unique device, some fifteen feet above the bell frame, appears to be a forerunner of the modern ring-beam.

During the early part of the Second World War, the bells were lowered to the ground and stored in the South transept as a precaution. Happily, the cathedral escaped major damage from enemy action. After the war, the bells were cleaned, tuned and re-hung with new gudgeons and ball bearings. This work was financed by the Friends of Southwark Cathedral.

In 1965, the six smallest bells were fitted with cast iron headstocks and new independent staples were fitted to all the clappers. All these various works have been carried out by the Whitechapel Bell Foundry.

The Sharp Second, cast and installed by Hayward Mills Associates, was added in May 2005 in memory of James G A Prior. Click here for more details. 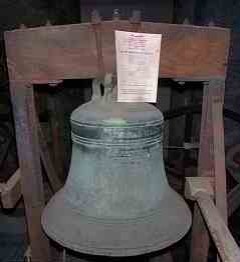 The tower also contains a fourteenth bell, “Peter”, originally one of two cast by Thomas Mears in 1838/9 for St Peter’s church, Sumner Street, Southwark, which was bombed in 1940.

The bell, which weighs approximately 6 cwt and sounds the note C, was hoisted to the belfry in 1952, and hung dead in a separate framework three years later. Around 1980 it was fitted with a solenoid chiming mechanism which is activated by the vergers and is chimed for mid-week services and those on Sundays for which there is no ringing.

Until the 1970s it was chimed from a rope that descended to the Vice-Provost’s stall. In the 1960s, the late Monty Meyer once managed to get himself locked in the Cathedral after a practice and summoned help by chiming the bell until it was heard by “Woody”, one of the vergers, who was in the pub with the ringers and, upon hearing it, returned to the Cathedral and let Monty out!