History of the Society 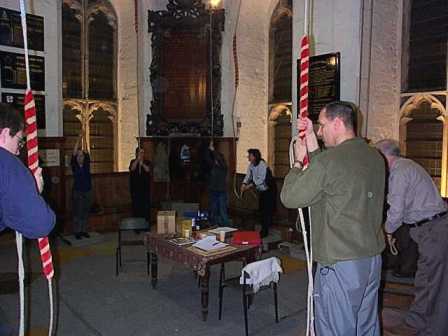 The Society was formed in 1911 after the bells had been extensively restored and the tenor recast, at Whitechapel. Prior to this, there had been very little ringing for about 25 years. The bells had been in a state of neglect and regarded as virtually unringable for much of this time. The condition of the bells (and, incidentally, those of St. Mary-le Bow) had, at the turn of the century, been described more than once, in the columns of the Bell News as “a scandal”. 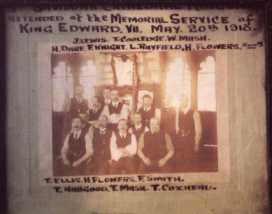 Research into how the restoration came about is on-going but we know that much of the funding was contributed by Richard White, a local entrepreneur. The reason for this generosity may be explained within the tenor inscription: Mears and Stainbank remade me to commemorate the happy reign of King Edward V11. Anno.Dom. MDCCCCX1

There is an interesting anecdote attached to this story. Sometime in the mid 1980’s, the writer met members of the clerical guild of ringers when they visited the Cathedral during their traditional “Low Week” outing. Once they were safely assembled, I went outside to listen to the ringing. An elderly gentlemen was sitting, with his wife, on one of the benches outside the south door. “You must be Mr. Uphill,” he said, “All these vicars have been turning up for a bellringing convention and a couple of them gave me your description”. He then made the astonishing remark “My father gave the bells of Southwark Cathedral”. I gently told him that that could not be, because the present bells had been in the tower since 1735. But he insisted again that it was true, “My father, Richard White, gave the bells of Southwark Cathedral”.

When he mentioned the name Richard White, I realised at once who he was and was able to explain the connection. I went back to the tower and brought down, for him, a photograph of the dedication of the new tenor bell in 1911, and a copy of the Ringing World in which the photograph had been reproduced. His wife immediately recognised his father, standing with the dedication group under the tower. So, after a pleasant chat, they went away, very happily.

Back to the Society! Old visitors and attendance books recall a reasonably strong band, ringing throughout the first world war and up to September 1921. Ringing on eight and ten bells seems to have been the norm, but enough were mustered for ringing on the twelve from time to time. Regular members of this band seem to have been T Mash, G Edwards, E Oliver, T Bugby, P Walden, T Walden, R Walden (churchwarden at the time of the long peal in 1923), A Marsh, T Coxhead, A Pettett, W Atkins, H Cork, G Harman and later H Flowers, A Howell and E Alex Young, the latter probably the most recognised and accomplished ringer of them all. Some interesting notes accompany the records of the time:

- And so on, all of the ringing recorded, with special occasions marked, much as we do, now - King’s Birthday, Ordinations, Hospital Sundays, the opening of New Southwark Bridge on June 6th 1921, until it all suddenly stopped in September 1921. At present, we do not know why.

An entry on March 2nd 1922 records six “pupils for new band”. One of these, William Harcourt Seabrook, subsequently became Ringing Master, a post he held until his death in 1950. Also in attendance at that meeting were Mr. R Newton, Instructor, Mr. A A Hughes (of the Whitechapel Bell Foundry), and, from the earlier band, Messrs A Howell, R Walden and T Mash. The book then continues to record all of the ringing, again, week by week, up to 1929.

We know that the tower remained active up to the war, because a separate visitors book records regular visiting ringers from 1916 to 1939. During this period, Southwark was one of the country’s leading peal ringing towers. 120 peals were successfully rung between the wars, a large number by any standard, quite amazing given the weight of the ring. However, it is believed that the Sunday band tailed off somewhat during the 1930’s and that help was enlisted from towers in the Diocese to keep service ringing going.

The bells, having been removed from the tower during the war for safety, were restored in 1947 and Southwark again became the centre for 12-bell peal ringing in London. An indication of the importance of Southwark bells in the re-establishment of 12-bell ringing is revealed in the following fact. The first 100 post-war 12-bell peals in London took 15 or so years to ring; 80 of them were at Southwark. The make up of the local band during the early post-war period is being researched. It is known that William Seabrook was the Ringing Master and that he was supported in various ways by the more active members of the College Youths, London County, Surrey, Kent and Middlesex County Associations. He died in 1950. An appeal went out to churches in the Diocese for people to volunteer to join the band and an assortment of ringers gradually came together. Thomas G Fox, Master of the College Youths seems to have taken on the role of instructor and he was assisted by Alfred B Peck and Anthony W J Appleton. The pupils seem to have consisted largely of middle-aged City workers. One of these, Aubrey Winn became Ringing Master in 1952. 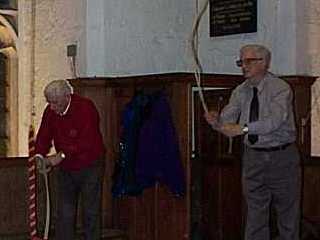 A system of members and associate members emerged and there was a great deal of goodwill and support for the tower for several years, probably helped by the fact that it was the only London 12-bell tower regularly available for peals. So we see a wide ranging membership, including, in 1955, for example, John Cannell (West Wickham), Tom Fox (Stepney), John Mudd (Mortlake), Jim Phillips (Primrose Hill), Jack Waugh (Woodford), Bernadette Whistler (Provost’s Secretary), Ken Cherril (Streatham) and Aubrey Winn. Associate members were Tom Archer, Tom Farmer and Chris Rew (Clapham Common RC Church), Fred Hurrell (Eltham) George Parsons (Clerkenwell), Jim Rea (Streatham). Shortly afterwards, Bill Rawlings of St Paul’s Cathedral and Beckenham became the Belfry Warden. We know that this band was capable of ringing the twelve and more information regarding this period will be included when available.

The College Youths arranged Sunday evening ringing once a month until about 1961 when this slot was taken over by a largely London County band organised by C M “Monty” Meyer. The regular Sunday service band had all but collapsed by this time and the bells were no longer being rung regularly for Sunday morning services. Aubrey Winn often used the Ellacombe Chiming apparatus to ring for the main services. The practices continued, however, supported by some of the older College Youths, John Euston from Streatham and members of the Chelsea band - John Lott, Veronica Dupre, Roger Overington and Monty and Gee Meyer - all being also involved in ringing for weddings and special services at City and other towers with no band.

Support for the tower seemed to evaporate overnight when, as a result of complaints received from Guy’s Hospital following a peal that finished at 10.40 p.m. on January 27th, 1962, regular peal ringing was discontinued. An unfortunate over-reaction on both sides led to the tower going into the doldrums for a dozen or so years. Those whom Aubrey Winn had previously been able to rely upon to help him to keep things going were no longer available.

In May 1963 John Pearce Higgins, Vicar of Putney, became Vice Provost. Having left behind, at Putney, a thriving Sunday band, he was amazed and appalled that there was no regular service ringing at the Cathedral. By September of that year he had persuaded Aubrey Winn to let “young Uphill” help him out (and the rest, as they say, is history - Ed). The innovations included invitations to towers within the Diocese to provide, once a year or so, a Sunday Service band some of whom took part in the offertory procession during the service (this sometimes, alas, resulted in two or three bands arriving to ring on the same day!); I arranged a band to cover for the occasions when no visiting band was due to come and for the Ordination Services. (Petertide, Michaelmas and Advent). I also started an open Diocesan ringers’ practice on the 2nd Wednesday of each month. Support came largely from the ringers of Wandsworth, Putney, Battersea, Clapham Common and Streatham. These were a great success for many years, though there was seldom very much in the way of 12-bell ringing. Grandsire Caters was very much the staple diet, followed by entertaining evenings in the Globe with Bill Rawlings frequently being moved to ask Aubrey Winn when next he intended to “push the boat out”.

Unfortunately some mean-spirited individual “pinched” the visitors book covering the period from the war until the mid 1970’s so our contemporary records are lost.

The next great change came in 1970. Bill Rawlings’ retirement from the post of belfry warden had led to the appointment of Jack Euston. Although the post was not supposed to be directly connected with the administration of the ringing, he “took over” the running of the 2nd Wednesday practice and support for it collapsed almost immediately. Aubrey was initially unconcerned, because he was now getting a “lift” to and from the Cathedral for all of the ringing.

I had, by then, been ringing with Monty Meyer’s 3rd Sunday evening band for about five years. Monty, in turn, had been a regular supporter of the 2nd Wednesday practices. We discussed the problems that Jack Euston had created, with him, and managed to persuade him to allow a further practice in alternate months for those connected with the 3rd Sunday ringing. Thus began the very first 12-bell practice to be run by the London County Association. Olive Rogers was Master of the London County at the time and very quickly established a successful 12-bell practice - the first in London to be run by a Society other than the College Youths or the Cumberlands. This continued for some twenty years until the long decline of the London County commenced in 1990. 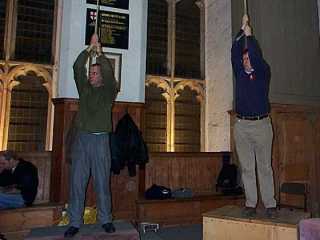 Meanwhile, very much the same group was continuing to support ringing at the Cathedral on a regular basis. These were augmented in 1975/6 by ringers from Camberwell, who I had been training at the request of the vicar, Canon Douglas Rhymes. We found that the novelty for the Diocesan bands of visiting the Cathedral on Sundays had largely worn off and fewer towers responded to invitations to support the Sunday ringing. The enlarged group found itself called upon more often to provide a band and this actually fitted in well with the earlier service ringing time at Camberwell, where the band was now thriving. In 1976, the Provost, the Very Rev. Harold Frankham agreed to the re-constitution of the Southwark Cathedral Society and the first new members since 1963 were admitted during the Cathedral Eucharist on St. George’s Day 1977. The following month, Aubrey Winn retired after 25 years as Ringing Master and Hon. Sec and I succeeded him. A presentation of a Jubilee Goblet (his Jubilee coinciding with that of the Queen) was presented to him at a gathering in the Old Chapter House shortly afterwards.

Bill Rawlings had died on 25th September 1976. Following a short service in Westminster Abbey on September 30th, the day before his funeral, members of the College Youths, including the Master (Richard Tibbetts) and Secretary (Jim Prior), came to Southwark and rang four courses of Stedman Cinques, half-muffled, as a mark of respect.

The further progress of the Society and events marked in the quarter of a century since its reformation can be marked by the following: